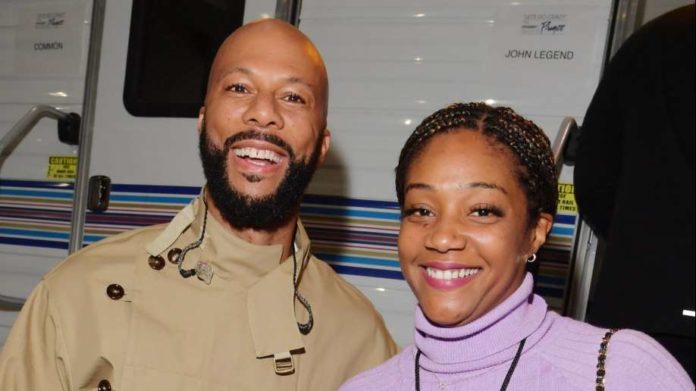 Tiffany Haddish and Common have found love in a quarantined place!

The actress confirmed her relationship with Common after nearly four months since the two were first romantically linked while chatting during the latest episode of Steve-O’s podcast, “Steve-O’s Wild Ride.”

“This is hands down the best relationship I’ve ever been in. Knock on wood! I’ve lost 20 pounds since I’ve been in this relationship. I feel more confident in me and it’s not him that’s doing it,” she said.

When the former Jackass star asked if her new boyfriend is the rapper Common, she joked, “Yeah. We’re twins now,” referring to her newly shaved head.

She continued, “ I’m just way happier and it’s like knowing I got somebody that cares about me, that really has my back. It seems like he does anyways. And I love it. I love him.”

She added that Common was very supportive of the decision to get a buzzcut, saying, “I’ve been talking about cutting my hair for years…he said it was beautiful. He’s like, ‘Wow, you did it man. You’ve got a lot of courage. You look so beautiful. I love it.’ And I’m like, ‘Ahh, put your head on my head.’”

The pair first met on the set of the 2019 film The Kitchen where they played love interests. “We became friends, but it wasn’t like anything sexual,” she explained. “Then, I went into this whole period of like, yeah, I want to start dating. So I got on Bumble May of last year…and I had been talking to Common and hanging out, like, he comes and plays Spades with me and my friends. At this point, our friendship was getting a little more than friendship, but not quite. During quarantine, we were FaceTiming all the time. And then he got tested for everything, I got tested for everything, and yeah, we’ve been fucking.”