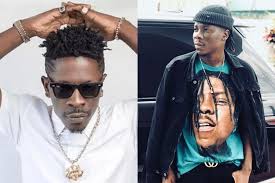 The Arts and Tourism Writers Association of Ghana (ATWAG) have condemned rival dancehall artistes, Stonebwoy and Shatta Wale for their scuffle at the just ended 20th edition of the VGMA.

In a lengthy press release, the group described the incident as unfortunate, inappropriate and a dent on the arts industry.

ATWAG CONDEMNS SCUFFLE BETWEEN STONEBWOY AND SHATTA WALE AT VGMA 2019

The Arts and Tourism Writers Association of Ghana (ATWAG) condemns in no uncertain terms the incident that marred the 2019 Vodafone Ghana Music Awards (VGMA) at the premises of the Accra International Conference Centre (AICC) in the early hours of Sunday, May 19, 2019.

A scuffle that happened between the respective teams of dancehall musicians Stonebwoy and Shatta Wale led to a commotion in the auditorium and the stoppage of the show for almost an hour. ATWAG considers the incident very unfortunate, inappropriate and a dent on the arts industry.

In as much as we support healthy competition in the music industry, we condemn acts that would generate unnecessary tension and could degenerate into violence. We wish to advise Charterhouse, organisers of the Vodafone Ghana Music Awards, to put in place better measures to forestall future occurrences of such nature.

ATWAG also urges Charterhouse to cooperate with the security services to investigate the matter and mete out the right sanctions where need be.

As significant partners in the arts and tourism value chain, ATWAG believes that acts like this would hinder the progress made by the industry and also has the tendency to mar the name Ghana carries within the international community as a peaceful nation.

We urge Stonebwoy and Shatta Wale and their fans not to inflame the issues any further through their utterances, but to rather stay calm in these times.