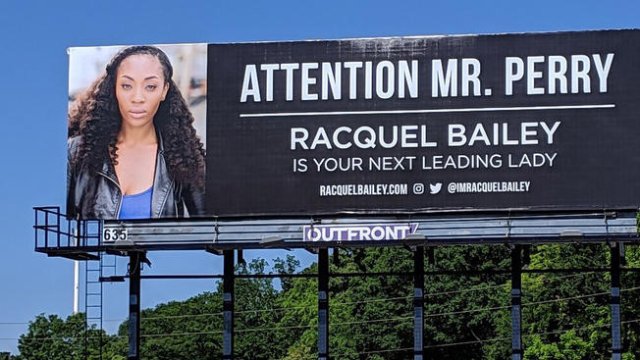 Tyler Perry has a message for actors — stop trying to get his attention via giant billboards.

The film mogul and megastar took to social media Wednesday to plead with aspiring actors after New York actress Racquel Bailey bought out two billboards in Georgia to get Perry’s attention and captured it in all the wrong ways.

Using two months’ worth of rent, 32-year-old Bailey plastered her face across billboards in Atlanta — home to  Tyler Perry — with the following message: “Attention Mr. Perry: Racquel Bailey is your next leading lady.”

The wife and stay-at-home mother of two — an 11-month old and a teenager —put up over $2,000 of the family’s housing funds with the aim of capturing Perry’s attention and scoring an acting job, 11 Alive reported.

Two days after the first billboard went up May 6, a casting agent from Tyler Perry Studios responded to Bailey with an audition opportunity for a TV show pilot, according to the AJC.

However, Perry also posted her billboard on Facebook Wednesday with a clear message: “This is not the way to get my attention if you’re looking for a role in one of my shows. Please DON’T DO THIS, SAVE YOUR MONEY!! This is the third time that someone has done this. PLEASE STOP! To audition is FREE!! I’m sure you can use that money for a better purpose.”

He said he appreciated the effort, but it was not the way to work for him. “I love that you want to work with me, and I love that you invest in yourself. But when you do things like this it puts my team on high alert and makes me look at you sideways,” he said. He added that he had seen Bailey in the popular HBO series, “The Night Of,” and was already aware of who she was.

Bailey replied to her post thanking Perry and explaining that she took a leap of faith. “Not everyone is going to agree or think it’s a great idea. That’s the chance I took!”

This was Bailey’s second attempt at using advertising to reach the man behind Madea.

In 2012, she rented a billboard located nearby Perry’s original studio with the same purpose but did not receive a response. In an interview with the AJC, Bailey said, “I didn’t get the results I wanted the first time so as they say, if you don’t succeed, try, try again.”

According to the article, she got the idea from the HBO biopic “Introducing Dorothy Dandridge,” which chronicles the early career of one of the most famous black actresses of all time. In the film and in real life, Dandridge was told that the best way the up-and-comer could get an agent’s attention was to put her face on billboards.

Bailey followed that same advice not only once, but twice.

In between attempts, Bailey kept grinding, honing her craft, auditioning for roles and gaining work experience, including a recurring role on HBO’s 2016 miniseries “The Night Of.”

For her second go-around, she strategically bought ad space located nearby the new Tyler Perry Studios, which is poised to be one of the largest motion picture studios in the U.S. She hoped that while driving to and from work, or sitting stuck in rush hour traffic, Perry might look upon her face and give her a chance. Bailey told 11 Alive’s The A-Scene that the billboards were well worth the investment, and she is glad that she put herself out there.