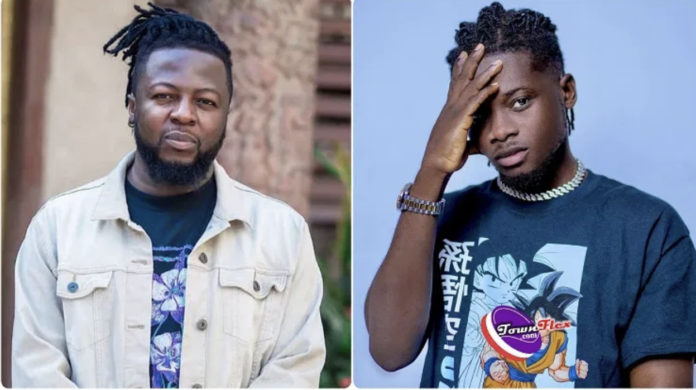 Hip-life musician, Maradona Yeboah Adjei, popularly known as Guru, maintains his quest to collaborate with Kuami Eugene was not to resurrect his perceived dead career as he asked critics if Kuami Eugene’s collabo with Nigeria’s Davido was a hit?
Lynx Entertainment signee Kuami Eugene and his label rejected a collaboration proposal from the “Lapaz Toyota” hit maker two years ago. The issue was resurrected  recently after Eugene indicated he could not work with Guru who according to him had constantly disrespected his boss, Richie Mensah.
This response from Kuami was addressed by Guru through an open letter in which he claimed his intent for the collaboration was to appreciate Eugene’s craft and foster unity:
“a collaboration is supposed to foster unity and not necessarily be a hit or resurrect the “dying” career of an artist as it is being speculated by critics”.
Guru who was guest on the entertainment segment of TV3 New Day with MzGee, asked his critics who claimed he wanted a hit song if Kuami Eugene’s collaboration with one of Africa’s most influential artists, Davido, ‘Meji Meji’ released in 2018 was a hit.

“…was Eugene’s song with Davido a hit? Doing a collaboration doesn’t guarantee a comeback or a big tune as a whole.”
Having been in existence in the music industry for over ten years, Guru is one of the big shots in Ghana’s entertainment circle. Not only is he a musician with big tunes to his credit but also a businessman as well as the CEO of NKZ record label which he is signed to. He has hit songs such as “Lapaz Toyota”, “Bonsam ani (the devil’s eye)”, “Samba”, “Alkayida” “Pooley Swag” among other big songs. He has worked with top musicians such as Obrafour, Sarkodie, Samini, Edem, and a host of others.