Tourism and Creative Arts Minister Barbara Oteng-Gyasi wants all African people to come together and forge closer bonds since emancipation Day reminds us that the African family was separated causing our people to suffer from the dramatic separation.

“We must all reunite as one family and strive to build a more humane society…to achieve this we need our brothers and sisters of the diaspora to forge that closed bond between Africans and Africans in the diaspora to make Africa rise and shine.”

She made this call at a mini durbar of chiefs and the elders of the Assin Manso community which hosted the Emancipation Day events on the historic grounds of the Slave Market and Memorial Park while adhering to social distancing protocols. 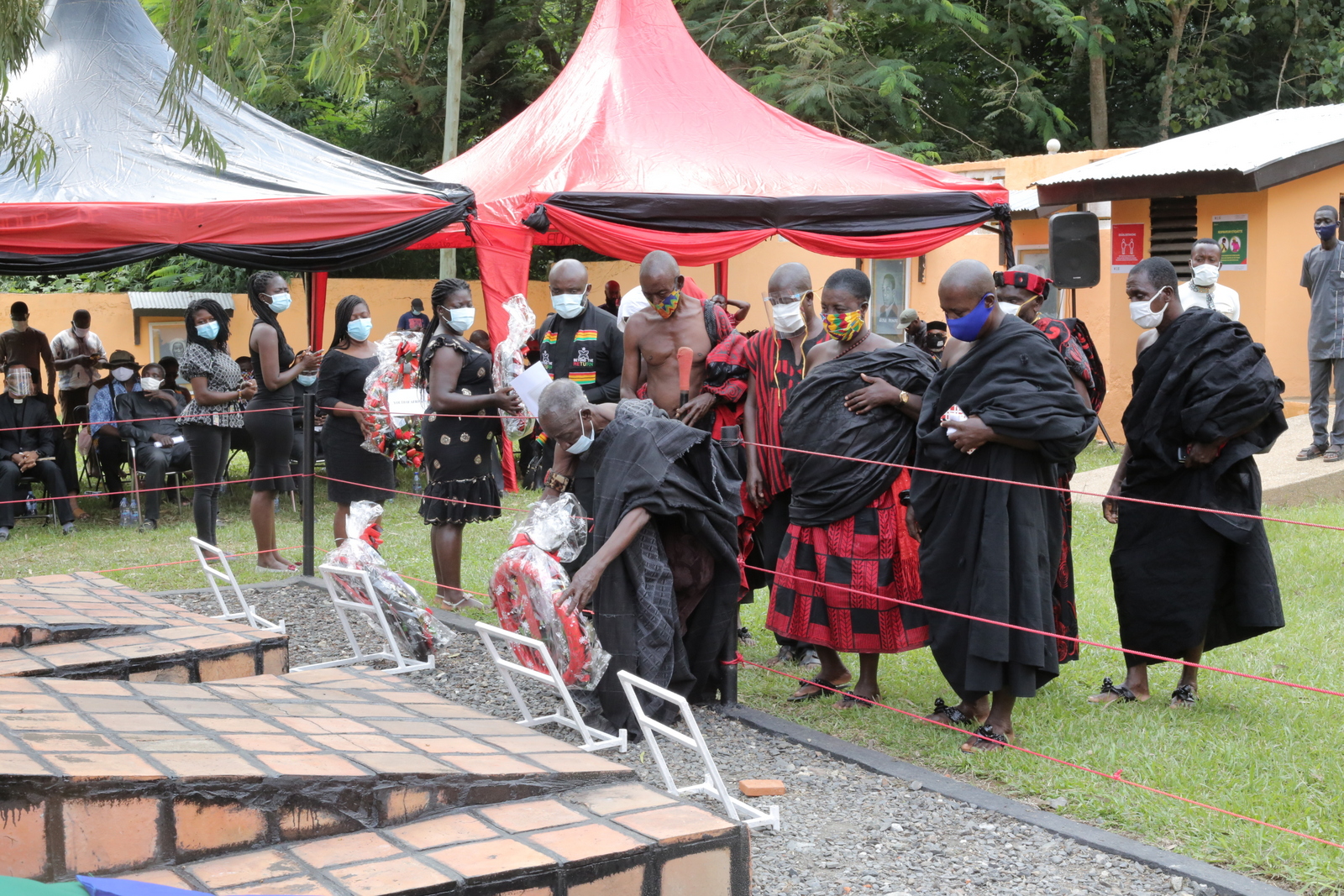 In memory of those who died during the trans-Atlantic slave trade, wreaths were laid in the Reverential Garden in front of the tombs of three enslaved Africans whose remains were repatriated to be buried on African soil; Samuel Carson from the United States, Crystal from Jamaica and the unknown enslaved African from Barbados. 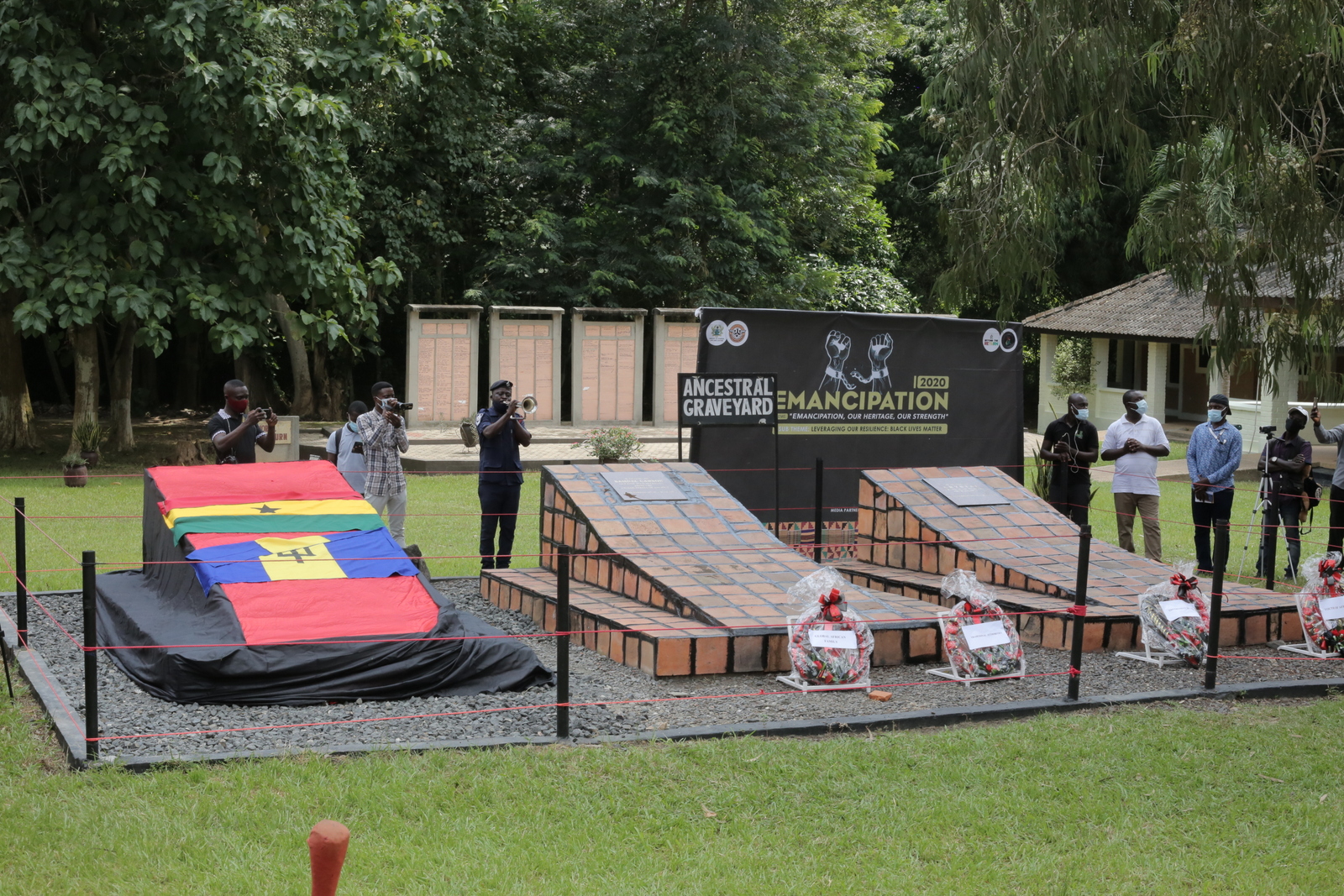 Emancipation Day is celebrated around the world to commemorate the liberation of black people from the system of chattel slavery. It was on August 1st, 1834 that slavery was abolished in the British Empire.

This year’s theme for Emancipation Day was ‘Our Heritage Our Strength’ with the sub-theme of ‘Leveraging Our Resilience: Black Lives Matter’. Events were organized under the auspices of the Ministry of Tourism, Arts and Culture in collaboration with the Ghana Tourism Authority, and the traditional leaders in the community. 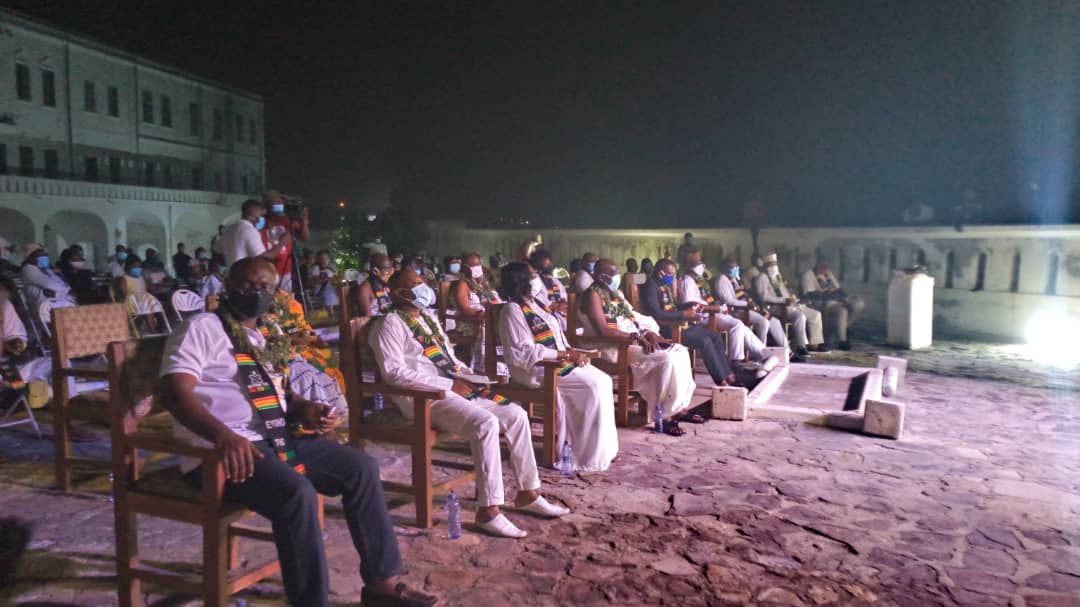 The night before Emancipation Day is known as Reverential Night and it is the night to pay homage the ancestors and light candles in their honour. In past years, a walk through the streets of Cape Coast, while wearing white, and singing songs of freedom occurs. Last year during the Year of Return over a thousand people gathered, but this year, because of the Covid-19 pandemic, the crowds were limited in number and the walk was shorted significantly.

Executive Director of PANAFEST Foundation, Rabbi Kohain started the candlelight vigil speaking to the small group gathered to remind us the significance of the night and that we were sharing each other’s light. The Minister of Tourism, Arts & Culture, Barbara Oteng-Gyasi, CEO of Ghana Tourism Authority, Akwasi Agyeman, Chairman of Diaspora Affairs, Akwasi Ababio, CEO of Ghana Tourist Development Company, Kojo Antwi, and Manager of Year of Return, Annabelle McKenzie were among the people leading the walk. The group was met by Paramount Chief of Cape Coast, Osabarima Kwesi Atta II and elders in the community who spoke briefly on the significance of calling on the ancestors to be with us in spirit as we celebrated the evening before Emancipation Day.

Limited numbers of people walked into the dungeons where a vigil held in honour of the ancestors. Prayers were said, a moment of silence was observed, and libations were poured to remember those who suffered. Seven candles were lit, and wreaths laid in memoriam, after which, everyone was led to the grounds where a celebration took place through theatre and dance that captured the theme of this year’s event. The National Theatre of Ghana’s actors did a moving performance that expressed the emotions surrounding the killings of innocent blacks in America as they called out the names of those who have lost their lives.