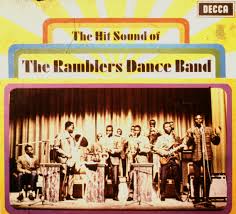 The very earliest documented form of Ghanaian trans-cultural popular music was ‘adaha’, an Africanised form of fife-and-drum and brass-band music that appeared on the Fante coast of Ghana in the 1880’s. The British had set up Ghanaian regimental ‘native orchestras at Cape Coast Castle as early as the 1830’s, but these did not lay local music. However, from 1873 between 5-7000 West Indians soldiers were stationed at Cape Coast and the neighbouring El Mina Castle to help the British in their Sagrenti War against the inland Ashanti kingdom. 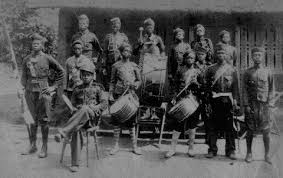 These British Caribbean soldiers had regimental brass-band, and in their spare-time they played Afro- Caribbean music. This acted as a catalyst for Ghanaian brass bands to indigenise their own music: by first copying the West Indians and then in the 1880’s creating their own distinct adaha music.

According to Attah Anan Mensah’s unpublished 1969/70 manuscript, the Ghanaians borrowed West Indian clave rhythms and calypso melodies such as the one that became the local Adaha song ‘Everyone Likes Saturday Night’. An early adaha band that Mensah mentions was the Lion Soldiers Band. 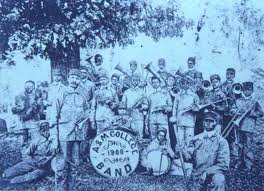 Adaha was a street-parade music and there were objections to it by the Europeans. In 1888 Reverend Kemp described the sound of drum-and-fife bands as ‘tormenting’ and warned that the danger of allowing Sunday school processions to be led by them, as they would ‘ultimately lead to the ballroom, the heathen dance and other worldly amusements’. 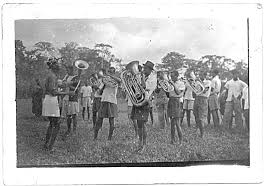 Then in 1908 the District Commissioner of Cape Coast (A. Foulkes) stopped the five local brass bands of the town from playing their ‘objectionable native tunes’ as these led to competitive quarrelling, obstruction of roads, drinking and dancing. Despite these European protestations the local marching bands spread from the Fante area and proliferated throughout southern Ghana, and until the 1930’s they were the principal popular music ensembles of the Ghanaian urban areas.